BUY ON: Amazon and Goodreads

MY BOOK REPORT
Everyone knows about the American Revolution—that George Washington won—but not very many people know it was due to a top secret spy ring of six working behind this rally. Brian Kilmeade and Don Yaeger bring this story to life in their book George Washington’s Secret Six; describing never before written details about this spy ring. Many people have not heard of the secret six because it was so crucial to keep them hidden. In fact, Washington kept these men so secret that one member of the spy ring remains unknown to this day. But what brought this spy ring together? And what was their secret behind their success? After Nathan Hale’s execution, Washington knew that in order to survive the Revolution, they must come up with a better plan. He knew that they needed spies who were common people that could blend in and knew the ways of the British. Slowly, and carefully, Washington built of the secret six—choosing men that were so loyal to America they would die before giving out our country’s secrets.
George Washington’s Secret Six was an amazing book.

I had only heard briefly about this spy ring that helped save the Revolution, but I had no clue the extent of the role that these men played. I really enjoyed learning in depth about the men who we have to think for our country’s freedom. I also thought it was fascinating how Washington chose the men who were in the spy ring—individually choosing each one. Kilmeades and Yaegers book is definitely one I recommend. I give this book five stars. 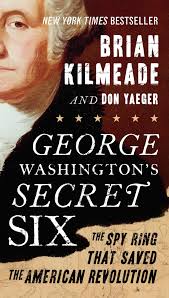