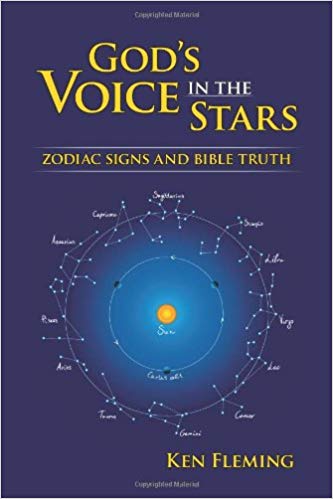 Look up at the sky on a clear summer night and it’s canopied with sparkling stars lighting up the dark sky. In God’s Voice in the Stars by Ken Fleming, he tells how behind each twinkling miracle there is a link back to Bible times. He tells of the twelve signs and the meanings that go along with them. Each chapter, Fleming goes in depth of each of the twleve stars and the fascinating meanings behind them. From Virgo , the Seed of the Woman, which signifies Christ the Incarnate Son, to Leo, His Enemies Distroyed, which signifies Christ the Victor, each star is a shining miracle. Genesis 1:14-18 – says “And God said, Let there be lights in the firmament of the heaven to divide the day from the night; and let them be for signs, and for seasons, and for days, and years:” From the beginning of the world, before even humans were created, God placed the stars in the heavens with a plan and a purpose. As proven in Psalms 147:4 – says “He telleth the number of the stars; he calleth them all by [their] names.” God wouldn’t individually name billions of galaxies, for no reason. Ken Fleming tells how there are even stars that showed His death, resurrection, and second coming. God’s Voice in the Stars informs the reader in a distinct fashion, about signs and wonders, found in a completely new place—the Heavens.

This book is a short, quick read (I finished it in under 20 minutes) that anyone can read. The author relayed the facts in a way that was not boring or flat. Stars are a fascinating creation anyway, but Ken Fleming wrote his book in a way that was easy to understand and “wow” at. If you are looking for an informative book that you can read in minutes and yet go away smarter, you need to look no farther–God’s Voice in the Stars is that book.

7 thoughts on “God’s Voice in the Stars”